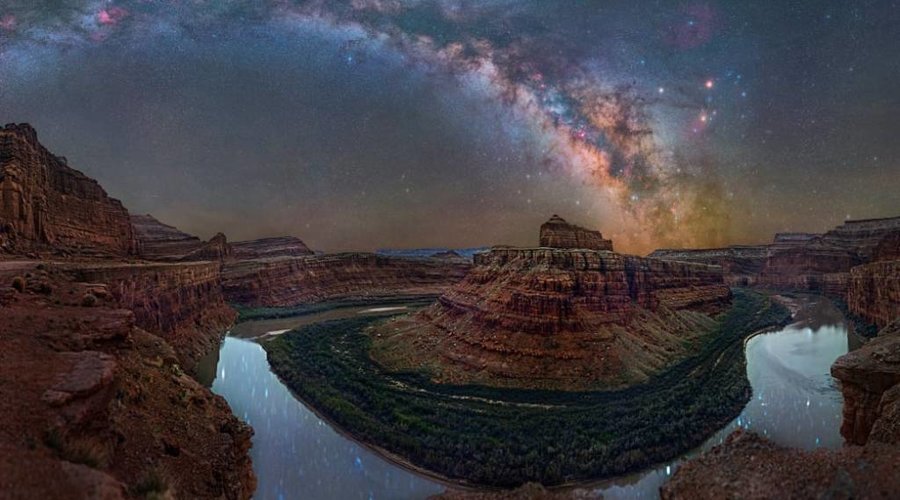 Shooting the Stars in Utah: A Conversation with Dave Lane, Astrophotographer

Dave Lane calls himself "an unabashed astronut.” For about two weeks each month from April until September, Lane spends his time frantically combing through maps of the western United States and studying weather patterns. What exactly is he looking for? Interesting landscapes and clear skies. "In a typical trip I will travel over 6,000 miles looking for not just a great shot, but an absolute epic shot," he says.

Night time photography, when done well, challenges even the most experienced photographer. There are many factors a daytime photographer doesn’t typically need to take into consideration, the biggest one being clear skies. While clouds can be a good thing for taking pictures during the day, if they show up at night, you're out of luck.

Every day of the week is different in the life of Dave Lane. One night, you might find him waiting for darkness at the Black Canyon of the Gunnison, while the night before, he was in New Mexico at the Ah-Shi-Sle-Pah Wilderness Area. The night before that? Great Basin National Park in Nevada. And Musselman Arch, Canyonlands National Park, Moab, Utah before that one.

"Chased from spot-to-spot by cloud cover," Lane tends to bounce his way around the big name national parks and lesser known wilderness areas, searching for the magic combination of clear skies and inspiring scenery.

As he explains, "in order to take images, including the main portion of the Milky Way, I have to find a suitably large object that allows an eastern photographic layout. That eliminates many views where such a vantage point is not possible. Many times I have found a fantastic view that is drop-dead gorgeous for a shot and the facing is wrong and the shot must be scrapped."

To make things even more difficult, there can't be any significant light in the area. In fact, almost any light can ruin an otherwise-perfect shot. "Once, on a very remote shot with excellent dark skies, an oil rig, about three miles distant but equipped with what must have been aircraft landing lights, cast harsh yellow highlights on many of the hoodoos I came to shoot. I managed to salvage just one of the four panoramas I shot."

From a logistical standpoint, an aspiring astrophotographer will also have to get used to some… unique conditions, such as working in complete darkness. The true mark of a talented astrophotographer? The ability to conjure something from "what looks to be inky blackness”.

Then there’s the solitude. An astrophotographer must sometimes go to great lengths for the perfect shot, but that also means getting to spend time in some of the most beautiful places in the country.

"I seem to live my nocturnal astrophotography existence within about a 500-mile sweep of Kanab, Utah,” Lane tells RootsRated. “There are such epic vistas here. Massive, knurled, perforated and sometimes completely insane geological formations that make you say, ‘What the hell happened here?’ At every turn there are canyons, arches, colors and swirls. It's enough to make a rock and astronut like me swoon.”

The colors and landscape of Utah are well-known for inspiring many an outdoor enthusiast. But what is Lane’s favorite part? "I have to say I think it’s the canyons,” he says. “They are so hard to do and so indescribably dark to behold. It’s like staring into the maw of some ancient demon or some earth bound black hole. I definitely have a love hate relationship with them. They are so very hard to photo, to process into a quality image, yet so magnificent."

We asked Lane to share a few of his favorite images and tell us a bit about what goes into capturing that perfect image. He chose one from Dead Horse Point, Utah, Musselman Arch, Utah, and one from Toroweap, Arizona.

Most people take pictures of Dead Horse Point in Utah from above, and for good reason. The road down to Dead Horse Point is a dangerous, extremely steep, white-knuckle drive. Schafer Canyon Road is listed as a dangerous road—not for the faint of heart, and should only be attempted by an experienced off-road driver in a 4WD vehicle. Heading down to the bottom the road starts out well enough—wide and in good condition. Then the wide expanse to the left begins to narrow, and it quickly becomes a rock shelf road hugging the side of the cliff face, thousands of feet in the air. To make matters worse, the road here on the cliff face is so narrow it’s nearly impossible to pass another car (luckily, you probably won’t have to). Despite the heart pounding experience, the some of the best views of the Canyonlands are along this road.

After looping around the cliff face, the real adventure begins—the switchbacks. Hairpin turns that have barely enough room to turn before going in the opposite direction will test the grip of your tires. After another six to seven miles of very bouncy and rough road at the bottom, there is an overlook with a great daytime view, but isn’t ideal for lining up the Milky Way at night. So keep on driving until you find the perfect foreground.

That night, the best time to shoot started at 4:00 a.m., because it was April and the Milky Way rises later in the night in the spring. Set up is on the edge of a drop that feels equally as frightening as the drive down. After capturing the 42 images that made up this final panorama, it’s time for a nap until morning comes.

Written by Abbie Mood for RootsRated.